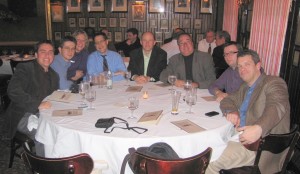 When you’re personally committed to post (almost) daily, there are times when the creative well appears to run dry. You resort to scanning your RSS reader’s PR and media folders for original posts, i.e., those that defy the blogging echo chamber.

You scroll down your news portal’s home page for any interesting fodder. And finally you do a Google News search for stories that contain some remotely intriguing PR element. Some days, they all do. Other days, zilch.

If you’re judicious and clever about the Tweeters you’ve chosen to follow, you can often pick up some good leads along the way. (Hey, Twitter may not be a total time sync after all!)

Take this morning. Presto Vivace’s inimitable Alice Marshall twittered a link to a post by TPM in which the authoritative political muckraking blog groused about its removal from the Justice Department’s PR Department’s e-mail media distribution list.

“Now, my immediate impulse was not to expect the worst. But suspicion is natural to a muckraker. Last spring and summer, we published countless posts related to malfeasance at the Department… Not only that, but I had done a story enumerating the false statements that Brian Roehrkasse, the Department’s Director of Public Affairs, had made in the course of the U.S. attorney scandal.”

The DOJ’s response to TPM’s query about its petulant removal from the list:

“I appreciated your desire to be in tune with DOJ press releases, however, unfortunately I am not able to add you to our distribution list. As you may realize we have a lot of requests to be put on our media lists and we simply are not able to put everyone on the list. We do however have all our press releases on our website and update them the minute they are released so I would suggest looking there. You can also always call us with press inquiries. Thanks again for your interest.”

And then there was a tweet yesterday in which Andy Beal extolled the virtues of Google PR Department’s mistake by cc’ing him instead of bcc’ing him on a emailed news release from the ad/search monopoly. Andy now has Google PR’s entire media distribution list, something PR Newser echoed via PR Meets Marketing blog, which gleaned it from the Marketing Pilgrim’s tweet.)

These and other sordid tales from the underbelly (e.g., RT and BC “separated at birth?”) consumed the conversation at last night’s NYC blogger meet-up where the likes of Paull Young, Constantin Basturea, BL Ochman, Richard Laermer, Jason Chupik, yours truly, Tom Biro and Kevin Dugan gorged on all kinds of artery-clogging ingestibles. (Aforementioned bloggers shown left to right in photo.) Shankman, where were you?