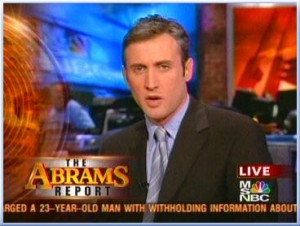 So once again, the world’s all a flitter over a prominent journalist jumping ship to get into the PR game. After all, they reason, who knows more about dealing with the news media than an actual member of the fourth estate, from a TV network no less? Right? Well…not necessarily.

Frankly, I found all the coverage of former MSNBC GM and show host Dan Abrams’ foray into PR somewhat amusing, if not familiar.

For decades, toiling as a print reporter was almost a prerequisite for landing gainful employment in the enigmatic world of public relations. More recently, broadcast producers and journalists having jumped onto the PR bandwagon with the notion that they have a greater wherewithal to”train” newsmakers in the do’s and dont’s of media command-and-control. According to Abrams in the NYO:

“Itâ€™s a mix of TV, online media and print people,â€ said Mr. Abrams. â€œI think itâ€™s somewhat equally weighted. Maybe a little bit more heavily toward TV. Itâ€™s everything from household names to producers to bloggers to people who have started their own online media entities.”

Well those days are waning. Not only is teleprompter-reading meaningless in today’s world of public relations, but working one’s clients through the mainstream media filter is a discipline that plays an increasingly smaller role in the PR toolbox. Mining the online conversation, engaging mainstream and citizen journalists, creating, optimizing and syndicating (captivating) digital content, navigating the social nets, microblogging, building personal networks…are just some of the new tools expanding our trade.

And let’s not forget one not unimportant underpinning: good ethics and instincts. Knowing when and how to address a PR issue takes more than just a few years to hone.

I am impressed that Mr. Abrams succeeded in enticing the former media reporter from the world’s most trafficked weblog to his new enterprise, adding some currency and cache. But, again, does shitting on scores of suppliant PR people really give one the skills needed to sit in the C-suite offering strategic PR advice? I hardly think so.

Dan, I am a big fan and I wish you well. I mean how did you assemble that most luminescent advisory board? Still, may I offer a piece of advice? Among the “20,000 experts” you hope to have in your database, you probably should consider adding a few actual PR professionals. They might add a dimension missing from the “experienced media insiders, bloggers, and authors” whom you propose “to help companies make smarter decisions about marketing and communication.”