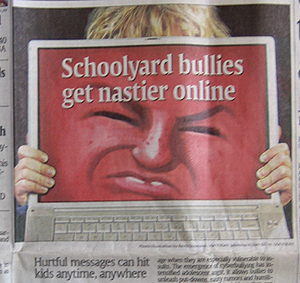 Tooling around the Web this weekend, I stumbled across this curious item that quoted my left coast friend and sometimes PR collaborator Howard Bragman of 15 Minutes fame.

Apparently, the editorial minds at Radar thought it would be a good idea to pose a “how would you handle” scenario to the Hollywood hypemaster.

Unfortunately the prospective beneficiary of Howard’s wisdom happens to be the sicko Mom in Ohio who posed on MySpace as a 16-yr-old paramour to an impressionable 13-year-old girl, an ex-friend to her daughter. That young girl took her own life after learning the faux teen’s true identity. There should be a law against cyber-bullying.

Does Radar think that PR can restore a semblance of civility to this warped woman, and which firm would consider even repping her, other than perhaps this one? Maybe someone should position the mother as the victim of online vigilantism? Howard offered up this correct, if not understated observation:

Frankly, there are so many other more important and provocative PR peccadilloes percolating in the online conversation this weekend. Among them:

— How can Hillary overcome her perceived “command & control” ways for the benefit of the voting populace (and her candidacy)?

— What PR advantage does a terrorist-backing state like Syria hope to gain by participating in a U.S.-led Mideast summit…in Maryland? Come to think of it, how will this administration milk it?

— How much truth is there in the class action claim that the world’s biggest-selling video game actually causes damage to the machine on which it was designed to play?

Put these in your PR pipe and puff on them for a while. As for Lori Drew, she should crawl back into the anonymous hole from which she emerged…if the tough online crowd will let her.