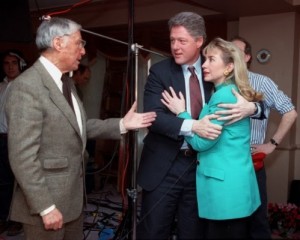 Paul Bradshaw, writing today for Poynter Online, raises an important issue that’s as old as, well, the age of citizen-journalists, i.e., less than 10 years: “In the E-mail Era, Who Owns the Interview?“

You may remember that Mr. Sorkin wrote a critical piece about Mr. Cuban. To have the final word, the inimitable Mr. Cuban responded by posting on his blog the unedited e-mail exchange he had with the Timesman, annotated to provide better context (eg, his POV).

In today’s Poynter piece, Mr. Bradshaw was the interview subject who actually requested permission from the reporter to post the full text of the raw email exchange. Her response:

“…the notes did not constitute a standalone story and [she] explicitly stated that I did not have her permission to publish the interview.”

Back when RSS was not even a glimmer in some programmer’s eye, we too tried to buy some insurance to protect against, God forbid, the likelihood that our client would be publicly skewered to satisfy a journalist’s pre-disposed story line.

The outlet in question was “60 Minutes.” To protect our client, we requested that CBS news allow us to videotape the interview ourselves. At the time, apparently no interviewee had ever made such a request of the pioneering investigative news magazine.

After a few days, the CBS News producer came back with a ruling: our cameras could roll only when his cameras rolled. The deal was done. Of course, syndicating that raw footage, if it were ever necessary, was an entirely different proposition than it is today when anyone has the means to feed footage (or anything else) from their desktop.

Bradford also cited the story The Times’s Brian Stelter co-authored in which he interviewed Jason Calacanis regarding Twitter’s now defunct, but then controversial “Suggested Users List.” Calacanis took it upon himself to publish the full email exchange on his influential blog. Looking back, Mr. Stelter reflected:

“As a journalist, having the transcripts of e-mails with a source be published isn’t necessarily the most comfortable part of the job, but I can’t object very strenuously, either. An interview is a give and take, after all, and the advent of the Internet has given interviewees an increasing amount of control. Dave Winer, I believe, calls it ‘sources going direct.’

“I try to say nothing in an e-mail that I’m going to regret later. The episode with Jason — which I had forgotten about — has not changed how I function.”

Even so, PR peeps, the practice of capturing a client’s interview — via email, videotape, digital audio, flipcam, whatever — should be standard operating procedure now that you have the ability to set the record straight, if need be. I would only recommend that the journalist be informed of your intentions in advance, so no bridges are burned.