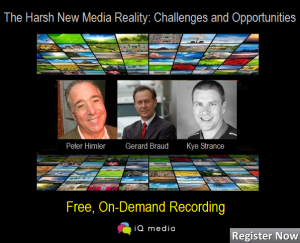 I recently was invited to wax poetic on state of the PR industry in a webinar gloriously titled The Harsh New Media Reality. From my POV, the session title begs the question(s):

Is this the best of times or the worst of times for both journalists and PR professionals.

For journalists, it’s no secret that the digitization and commoditization of news has tanked the economics at traditional media companies resulting in layoffs and much hand-wringing. On the other side of the coin, smaller, digitally native news sites are on a hiring binge, albeit and markedly reduced salary levels. Still, quality journalism thrives.

For PR pros, the traditional discipline of media relations (aka “earned media”) has taken it on the chin. For example, at a Publicity Club of New York luncheon last week that featured top tier business journos, Business Insider’s Nich Carlson admitted that he hasn’t written a piece proposed by a PR person “in years.’

Carlson also echoed what past PCNY panelists have said about the unwieldy state of their email inboxes, e.g., “hundreds of emailed PR pitches a day.” Hence, when it comes to engaging editorial decisionmakers, it’s never been harder without pre-existing relationships. On the other side of the coin, the PR industry has embraced other means for getting their clients’ stories into the media, namely owned and paid schemes, and paid/owned and earned/owned hybrids.

Here are the some questions I addressed during the CommPro.biz-hosted session. Sign in as guest to listen to the audio. The initial Q&A runs from 0:00->10:20).

A bit later in the session, someone raised the incident in which Microsoft’s new CEO, with one tweet, alienated not only his female workforce, but women workers everywhere by insinuating that they need not ask for a raise. It will just happen. Trylon’s Lloyd Trufelman questioned whether that story would have had the same kind of traction and caused the headache it did had it lived on Twitter alone. The discourse runs from 48:53–>54:14.

Finally, I added some thoughts on the rising crop of digitally native news sites committed to producing quAlity journalism with the hope they gain greater voice. (55:29–>56:03)