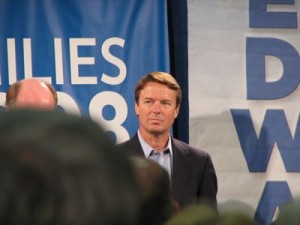 When Sen. Clinton’s PR consigliere recently said in a New York Magazine piece that she admired the Bush White House’s skills of message control, I’m sure many readers were left wondering whether this was a good thing or a bad thing (this blogger among them).

This Presidency has been the most opaquely deceptive in history. Still, a controlled approach to advancing one’s policies has its virtues too. Imagine if PR was actually used to further the public interest?

Today, the big news from another Democratic candidate takes the latest Bush spin to the carpet. Sen. Edwards decries the PR tactics of the Clinton campaign, oops, I mean the White House and its well-oiled machinations to deneuter the widely anticipated Petraeus report. And you know what? The well-coiffed Senator from North Carolina is right to do so.

Once again, this administration has lulled the sleepy keepers of the media agenda into thinking and reporting that the war in Iraq has actually turned the corner. It’s a full court press to stay the course, no matter what the General, Congress or any visitor to that country (except perhaps for Katie Couric) has to say. Even a review of the new, sanctioned book on Mr. Bush took to the front page of The New York Times offering a relatively sympatico look at Mr. Bush, the man.

In thinking about Sen. Clinton’s advisor’s comments on Mr. Bush’s PR prowess, I’d have to concur that it is impressive. That’s not to say that the public or world is better off as a result. Quite the contrary.