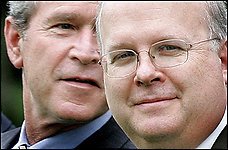 Just when you thought America was safe from Karl Rove, the administration’s stealth puppeteer re-emerged this week. The AP reports that Mr. Rove today has even more power and presidential sway than he had prior to his alleged demotion in April.

His fingerprints are all over not one, but two big PR productions (Katrina and The Legion) designed to jump start support for Mr. Bush’s domestic and foreign policy agendas ahead of the mid-term elections. I can just picture the bespectacled neo-con presiding over a PR brainstorming session in Crawford, TX this summer.

Mr. Rove: I’ll open the session by asking what upcoming national events are ripe for advancing our political message?

Condi: What about the Little League World Series? It’s a U.S. team from Ohio versus one from Japan.

Mr. Rove: No, although the Japanese government pulled its troops from Iraq, we’re counting on them for air support. Let’s not push our luck. Also, isn’t Jon Stewart already exploiting the state of Ohio? Anyway, I think it’s Columbus, Georgia, not Ohio. Get your facts straight.

Condi: I thought you said “no negatives” in a brainstorm session.

Rummy: How bout a big show of support for Joe’s Senatorial campaign?

Mr Rove: Good thought, Rummy, but our base still sees him as a Democrat, and a Jew at that. It’s too risky.

Dan Bartlett: Why don’t I set up a friendly interview with Katie Couric as a kick-off to her debut on the Evening News? She’s always been a big supporter.

Mr. Rove: Sorry, Dan, we already set that up.

Dan Bartlett: Karl, I thought that was my job.

Tony Snow: My news instincts tell me there’ll be lots of cameras in New Orleans for Katrina’s one year anniversary.

Mr. Rove: Hmmm. Interesting thought, Tony. It’s risky since there are plenty of people who are still pissed off at us. Though with enough prepping, we might get Dubya to pull it off.

Tony Snow: Let’s send the First Lady with him to give it a woman’s touch, but keep his mama away. You saw what she said in Spike’s movie, didn’t you?

Mr. Rove: No. I’m waiting for it to come out on VHS, but I’ll take your word. Let’s do it. Set up a tour of the area, but show only the progress made over the last year. Also, let’s have the President express some contrition this time…but not too much. We can’t be seen as weak.

Tony Snow: Yes sir! I’m on it. I’ll call my buds at Fox to see what they’ve got planned.

Mr. Rove: OK, just do it. Now that we have our domestic PR plan in place, how can we buy some more time in Iraq?

Mr. Rove: Rummy, in case you haven’t noticed, it’s much more dangerous now. If the President gets blown up on the road from the airport, it would look real bad on the nightly news programs.

Condi: Maybe another speech at a U.S. military base or school?

Mr. Rove: Been there done that. But what if….

Mr. Rove: I was just going to say that.

Condi: Actually, it was mine. You heard me say the word military.

Mr. Rove: Sit still, you two. I’m in charge here. I have an idea where you both can shine.

Rummy: Bring it on, Rover!

Mr. Rove: The American Legion kicks off its national convention at the end of August. I bet we can get those old codgers to give us as many speaking ops as we want. They love war. We’ll be speaking to the converted. I bet Dubya would even want to get in on it. It’ll be better than even the RNC. Barlett/Snow — make sure we get lots of cameras there.