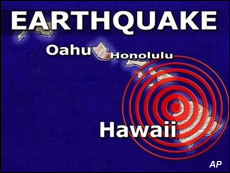 In an editorial, Honolulu’s leading daily newspaper doled out kudos to public relations pros for preserving the state’s tourism industry following the recent earthquake. The Star Bulletin’s opinion piece titled “PR campaigns help offset quakes’ effect,” admitted a softening in tourist visits, but says it could have been a lot worse:

“The drop does indicate a softening of the market, particularly on Oahu and Maui, but the numbers also suggest that public relations efforts to assuage travelers’ concerns about post-quake conditions here were successful.”

Last year, I posted on the earthquake in the Yucatan Peninsula, which reminded me of another below-the-border quake back in the 80’s. We repped Fonatur, the Mexican Tourism Board, and were tasked to put in proper perspective the apocalyptic tales of destruction reverberating in the global media in the quake’s immediate aftermath.

In reality, the actual damage was confined to relatively small areas. We immediately dispatched a TV crew to Mexico to capture on tape (3/4″ SONY U-Matic, no doubt) aerial views of the earthquake’s impact.

We fed the footage via satellite to local U.S. broadcasters encouraging them to downlink it for use in their newscasts. For the folks at PR Watch, please know that the footage was clearly identified as having been produced by Fonatur! We also booked the Mexican Secretary of Tourism back-to-back on two network morning shows (with accompanying footage).

Anyway, it was refreshing to see a newspaper acknowledge a PR campaign at a time when such acknowledgement is rare indeed.