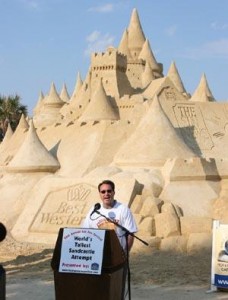 The big debate today in Washington concerns one State Department official’s characterization of the three Gitmo suicides as “a good PR move.” This, of course, prompted Department spokesperson Sean McCormack to quickly disavow the remarks:

“I would just point out in public that we would not say that it was a PR stunt.” (What would he say in private?)

Now our industry is accustomed to creating all kinds of publicity stunts with the sole purpose of generating colorful headlines and photos. So the question of whether these suicides were committed out of despair or in a concerted effort to generate (U.S.-damaging) headlines is a good one.

By extension, one would have to ask whether suicide bombers do what they do to kill innocent human beings or to produce headlines — or both? If primarily the latter, would these acts be considered PR moves? And if they are, why not call a spade a spade?

What ever happened to the simpler PR stunts like building the world’s largest sandcastle (to draw tourists to Myrtle Beach)?