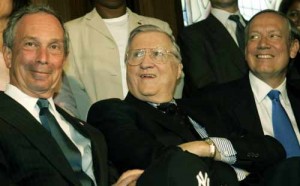 At least the story broke on a sultry summer Friday in August. Most of the city’s movers and shakers have checked out to eastern shores to escape the city’s oppressive temps and humidity.

But there it was — trumpeted on the front page of New York’s top tab in advance of the “news” breaking in Conde Nast’s Portfolio.

In what has been a well-kept secret for too long, the Boss of New York’s priciest sports franchise has aged — big time. And with age, in the age of Alzheimer’s, comes the loss of one’s mental (and other) faculties.

What intrigues me most is not how a once vitriolic, but vital voice in the mosaic of New York has succumbed to the ravages of senility. But rather, how the fallibility of the once infallible Mr. Steinbrenner didn’t make news before today.

“According to the article, Steinbrenner repeatedly said, “Great to see ya,” to nearly every question posed by a longtime friend during a recent visit.”

Here’s one possible explanation: both the Yankees boss and the publication breaking the news, including its boss, share the same high-powered PR consigliere. So with a most unflattering story poised to break in Portfolio, someone decided to pre-empt (on a Friday) the monthly’s shocking details.

“Steinbrenner’s spokesman, Howard Rubenstein, yesterday said the repetition ‘might be a defensive mechanism. He doesn’t want to give any interviews, and it’s better to say, ‘It’s great to see you,’ as opposed to ‘Get lost,’Rubenstein said. ‘I think George is in a good way. And it isn’t right for someone to come in under false pretenses.'”

This pre-emptive, pre-weekend strategy is reminiscent of the brokering of the breaking of another highly embarrassing story about a client of said PR man. Hey, come to think of it, it worked: we haven’t heard much about that one since. The hope is that this sad Steinbrenner saga will also fade from the front page and quickly into memory.