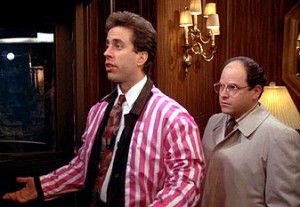 I was watching Seinfeld the other night. It was the episode in which Jerry and George were biding their time with Elaine’s curmudgeonly father while Elaine was nowhere to be found. (<---Jerry was wearing his expensive new suede jacket with the pink-striped liner.) Seeing Jerry and George fret over the no-show Elaine, I was struck by the fact that Seinfeld may finally be showing its age. Why didn’t Jerry just whip out his mobile phone to call her??? Could it be that the brick-sized cordless handset in Jerry’s apartment represented the latest in mobile technology during the Seinfeld first-run era? No one had cell phones? 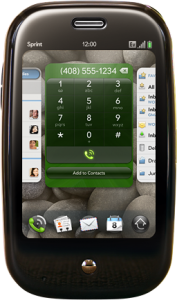 Today, we were greeted with the latest flurry of media coverage surrounding Saturday’s consumer debut of the Palm Pre. (I could swear that the Palm brand lived its glory days during those Seinfeld years?) Maybe this why the company tapped Costanza to host and Seinfeld to perform at the Hollywood coming out party for the latest iPhone wannabe.

“…The Pre, which goes on sale Saturday, is an elegant, joyous, multitouch smartphone; itâ€™s the iPhone remixed.”

“The Pre may be a cool device, but it won’t restore Palm to its former glory.”

The party itself also elicited some paradoxical coverage.

“Tonight was a night of contradictions, driving to the Palm Pre VIP event in Hollywood, it was raining and the sun was shining at the same time,” wrote Lynn Wolford on the Wireless and Mobile News blog.

“This phone has the power to end my marriage and start a new one. It’s that powerful.”

(I wonder what his appearance fee was?) Still, in an age when product launches have to work double-y hard to gain any kind of broad media awareness, you have to give the Palm Pre engineers and ergonomics folks credit for their good work, and its PR team kudos for seeding the right gadget gurus in a pre-release buzz blitz.

We still can’t overlook Blodgett’s point about how all those third-party apps for the iPhone may prove an insurmountable hurdle preventing any mass platform defections in Palm Pre’s direction. And then of course there’s the return of Steve Jobs to Apple with a new iPhone in hand. Did you know that the Palm Pre syncs with iTunes?