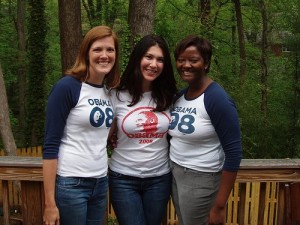 Of the several sessions I attended at the Time Warmer Summit: Politics 2008, it was the last one, “The Candidate and the Media: Creating the Brand, Maintaining the Brand, Preserving the Brand” that held the most resonance for the PR/marketing set.

There was a generous discussion of what’s more important in a campaign: organization or message? Obviously, Obama has stayed on message while his campaign built an impressive, if not unprecedented grassroots organization (partly because of the resonance of his message.) McCain started off with a strong compelling message, but proceeded to completely muddle his “brand” identity by pandering to divergent Republican interests.

As far as organization, all agreed that the McCain campaign was/is nowhere nearly as ubiquitous as Obama’s. Still, it was comments like these that really got me thinking:

Joe Trippi: “The Dean campaign [for which he served as campaign manager] was like the Wright Brothers [in terms of digital sophistication]. In contrast, the Obama has bypassed the Mercury program. They’re at Apollo 11 and will land in the White House.”

Andrew Rasiej: “Obama will be the first person to go into office with a 10 million-person email list [and the ability to instantly garner support for his policies].”

Joe Trippi: “The next campaign is going to make Obama [his digital acumen] look ridiculous.”

Rasiej’s quote was especially provocative. We’ve certainly seen how companies and organizations have used digital and social media to create dialogue with (and empowerment of) their constituents. What if the executive office of the United States of America was able to advance its policies with similar tactics applied to the wired masses of qualified supporters?

Some will argue that this is exactly what Bush-Cheney-Rove insidiously perpetrated on the American public, i.e., bypassing the media filter to deliver controlled direct-to-consumer messaging. But I would say that the prospects of a direct line of communications between an Obama presidency and the American public takes a much different, and ostensibly more positive turn…so long as the channel remains two-way.

While the Bushies used top-down programmed surrogates, fabricated news, and sympatico media to advance their policies, President Obama, it seems, is poised to create a transparent exchange of information with those who elected him (and presumably others). As a result, the dynamics for securing public support for a policy will never be the same.