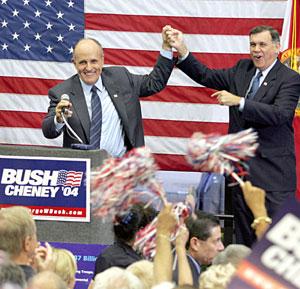 The story concerned the subtle message delivered by the Giuliani campaign in its run-up to a Presidential showdown with Mrs. Clinton.

One of Mr. Giuliani’s big (Texas-based) donors set up a website nefariously funded by a 527 to swift boat Mrs. Clinton. The site aspires to “to shed light on the real Hillary Clinton and the danger she and her ideas pose for America.”

According to The Times:

“While the Giuliani camp has no direct connection to Stop Her Now, some Democrats argued yesterday that Mr. Giuliani â€” who seems poised for a possible presidential run of his own â€” should disavow the personal nature of the criticisms that the group is leveling at Mrs. Clinton.

Sunny Mindel, a spokeswoman for Mr. Giuliani, declined to comment.”

One would have thought that America’s Mayor and Time’s Person of the Year would not wish to appear in cahoots with this less-than-savory swipe at his future adversary. But, then again, how many campaign stops did the former NYC Mayor make on behalf of less-than-savory Bush apologists in this last election? Or what about the rumors that have RNC bad guy Ken Mehlman joining the still stealthy Giuliani bandwagon?

I guess the point of this rant has less to do with who should sit in the post-Bush White House and more about whether the next President will have risen above these unscrupulous means in earning the position. Thus far, the news is not encouraging.