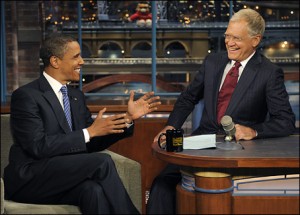 If you’re an A-list newsmaker, you can pretty much call the shots over where, when, and how you take your media interviews.

And today, there are few bigger newsmakers than the leader of the free world (unless you count celebrity-du-jour Lady Gaga (or that “skank with a brain.”) But I won’t go there.

The Wall Street Journal (and others) today report on President Obama’s media blitz slated for this coming weekend in which he has no fewer than five network appearances on the docket, including Letterman on Monday.

“The president’s heavy media schedule raises questions about whether his ubiquitous presence will dilute his effectiveness as a pitchman.”

“I don’t dismiss this idea that if at some point you fire your best weapon and it doesn’t work, what do you do next? But you come to the point in a debate where you’re not worried about the next battle.”

The President intends to four-wall the Sunday talk shows, something few mortal newsmakers can do. I’ll never forget the angst involved in organizing the first U.S. TV interviews for HSH Prince Albert and Princess Stephanie on both GMA and Today, arch rivals. We finally negotiated to have GMA go live and Today pre-tape, or was it vice-versa? No matter.

As for the Journal‘s POV, my feeling is that if you have a powerful communicator with a compelling message, there is little reason not to deploy him far and wide. In fact President Obama’s relative absence from the media sphere this summer, likely fueled the need to play catch-up today. Also, this weekend’s not the first time our President pressed the press with his presence.

Still, White House Deputy Press Secretary Joshua Earnest is not worried about the prospect of a diluted message:

“The president accepted invitations to appear on these programs to talk about his health plan. These programs reach a variety of audiences because we’re confident that the more the American people understand about the president’s plans for health-insurance reforms, the more likely they are to support it.”

And, of course, we all know about the importance of being earnest, especially for a PR pro.