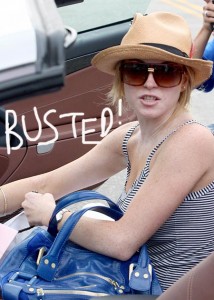 “A call to Lohanâ€™s publicist was not immediately returned.” Well, even if it was, what can a publicist possibly do or say in response to news of her client being arrested (again) for DUI and cocaine possession???

This (not-unexpected) turn of events comes on the heals of Ms. Lohan’s (second) high-profile release from the obligatory Hollywood rehabilitation facility. In fact, the Promises Malibu Alcohol and Drug Rehab Treatment Facility may have a PR problem of its own given the failure rate of its prominent patients. Didn’t that other celebrity train wreck also “graduate” from Promises?

Well, Perez and soon the mainstream media will be all over this one — not so much for the surprising nature of the news, but more for the salacious prospects of Ms. Lohan following in the footsteps her partying princess pal Paris. Maybe Lindsay’s Dad, who attempted to bring Jesus to his daughter and feels partially responsible for her waywardness, can offer some jailhouse tips of his own.

What’s especially unfortunate is that of all the bubbleheads that dominate the tabs, celeb glossies and gossip blogs, Ms. Lohan actually had talent and a tremendously bright future. Wasn’t she once compared to La Liz? Now she’s reduced to faux-celebrity born out of infamy, and there’s little Leslie Sloan Zelnick or anyone can do to gloss over this sad reality.