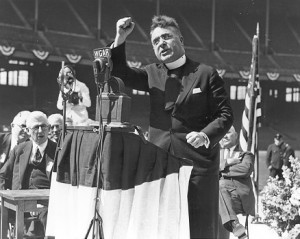 Last week, I happened to catch one of the unfair and imbalanced Bill O’Reilly’s “Talking Points Memo” segments (not to be confused with the pilfered name of Joshua Mica Marshall’s influential blog).

In the Soros segment., the host showed a chart of the organizations to which Mr. Soros donates to advance his positions on various issues. (It failed to mention Soros’s recent $3 million donation to fight TB.)

Nor did it make any mention of the much more insidious money men who opaquely operate on Mr. O’Reilly’s side of the political spectrum. In fact, our President just appointed one of them as his Ambassador to Belgium — unscrupulously bypassing Congress, which would have rejected him based on his lack of qualifications for the job (except as a big Republican donor).

But getting back to Mr. O’Reilly (with whom a client of this blogger did battle in the immediate aftermath of 9/11). As the Ivy League researchers in the previous post were examining the racial bias of basketball referees, several researchers in the journalism department at Indiana University were looking at Mr. O’Reilly’s journalistic technique.

They “…studied six months worth, or 115 episodes, of O’Reilly’s “Talking Points Memo” editorials using propaganda analysis techniques made popular after World War I.”

“O’Reilly is a heavier and less-nuanced user of the propaganda devices” than the notorious Father Charles Coughlin (pictured above) whose “sermons evolved into a darker message of anti-Semitism and fascism, and [who] became a defender of Hitler and Mussolini.”

While frankly I’m not surprised, by the imbalance of Mr. O’Reilly’s daily rants, it is very disconcerting to think that:

“A 2005 Annenberg Public Policy Center survey found that while 30 percent of Americans viewed Washington Post and Watergate reporter Bob Woodward as a journalist, 40 percent of respondents considered O’Reilly to be a journalist.”

Next time you catch Mr O’Reilly, or any so-called “news” show on Fox News Channel, count the number of guests who represent an opposing, yes, liberal, point of view.