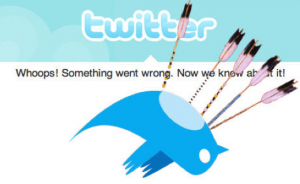 During the nascent days of consumer generated media (CGM), communications pros obsessively focused on “mining the conversation” — think Dell Hell and JetBlue — and helping companies craft policies to avert the release by employees of defamatory, proprietary or material information into the burgeoning social and blogo spheres.

The rise of Twitter and Facebook almost mandated that companies lay down some specific employee ground rules, especially within public companies and news organizations.  For many, a macro approach seemed adequate, i.e., “Don’t be stupid.” But as my friend Perry Hewitt, chief digital officer at Harvard University, reminded me in a tweet:

@peterhimler one would be surprised by the level of variable interpretations of that word! (See also: “don’t be evil”)
â€” Perry Hewitt (@perryhewitt) January 22, 2013

Proskauer Roseâ€™s second annual â€œSocial Media in the Workplace Around the World 2.0â€ report found that in 2012, 68.9 percent of employers said theyâ€™ve created policies specifically for social media use, compared to 55.1 percent in 2011. Among the nearly 250 multinational businesses surveyed in the past two years, social media monitoring by employers increased in the last year from 27.4 percent to 35.8 percent.

Today, communications pros have expanded their purview beyond mining the online conversation and managing employees’ use of their social channels. Many are focused on creative storytelling and plying big data to more effectively identify and engage audiences so these (sponsored) stories are shared in social media.

The need to create and enforce social media policies has been somewhat of a foregone conclusion until yesterday when Steve Greenhouse of The New York Times weighed in with a piece titled: “Even if It Enrages Your Boss, Social Net Speech Is Protected.”

Huh? You mean if an employee wants to rant about his employer, or worse, pump up the company’s stock with insider information, this may be viewed as “protected speech?” Here’s the lede in The Times piece:

“As Facebook and Twitter become as central to workplace conversation as the company cafeteria, federal regulators are ordering employers to scale back policies that limit what workers can say online.”

Apparently, this effort to loosen strict social media policies in the workplace comes from the National Labor Relations Board:

“…in a series of recent rulings and advisories, labor regulators have declared many such blanket restrictions illegal. The National Labor Relations Board says workers have a right to discuss work conditions freely and without fear of retribution, whether the discussion takes place at the office or on Facebook.”

A closer read reveals that the new rulings and advisories only “apply to virtually all private sector employers”…but also make it “permissible for employers to act against a lone worker ranting on the Internet.” What constitutes an actionable rant is left for interpretation.

Maybe the macro approach of “don’t be stupid” works better for private companies, and a more detailed (i.e., micro) policy of social media do’s and don’ts remains valid for public companies, which have Reg-FD to contend with.  Then there are the news organizations, many of which wish to preserve their historical roles as keepers of the public trust. 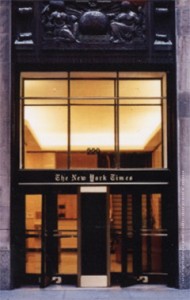 I’ll always remember The New York Times debating whether to break its long-standing policy and allow another news organization (CBS “Sunday Morning”) to film in its newsroom. One concern was that many reporters had personal photos (some political) pinned to their cubicle walls. The Times ultimately acquiesced and the segment – marking the 150th anniversary of the Ochs-Sulzberger’s family ownership – was a total home run.

Last year, I presided over a Social Media Week panel featuring the social media leads from Reuters, NBC, Bloomberg, CNN and The New York Times. One common misperception was that their primary job was to tweet and post links to their (and other) news organizations’ content on Twitter, Facebook, Tumblr…  The term “Twitter monkey” actually surfaced.

In reality, the more seasoned of these social media leads played vital roles in articulating and instituting the policies that govern how rank & file employees can behave in their social media channels. Now I wonder how the NLRB’s new rules protecting the online speech of private company employees will apply to these journalistic enterprises?