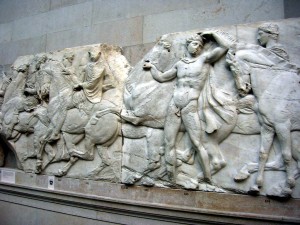 The audacious decision earlier this month by Metropolitan Museum Director Philippe de Montebello to repatriate several pieces of looted Hellenstic art to the Italian government garnered global headlines and many positive accolades. (The Met’s communications chief Harold Holzer should have been pleased.)

“…he became motivated to begin negotiating with the Italian government for the return of the objects only when he concluded that the issue would not go away. ‘I began to reflect: What’s the best way out?’ he said.”

Does this mean that if the public rumblings, played out in the news media — weren’t so loud, he would have opted to keep the vase? Perhaps the standing ovation he received by his fellow museum heads made the decision less painful.

His decision of course has tremendous implications for museums the world over. A couple of years ago I had a chance to meet with the Greek Minister of Culture who sought to finally have the sculptures , stripped from atop The Parthenon by Lord Elgin (“The Elgin Marbles”), repatriated to his country after two centuries of trying. This is but one of a myriad other examples of museums holding priceless antiquities whose provenance is dubious at best. Will Mr. de Montebello’s decision open the flood gates to their owners’ claims?

I would like to think that Mr. de Montebello made the decision to repatriate because it was the right thing to do, and not because it was “the best way out.”