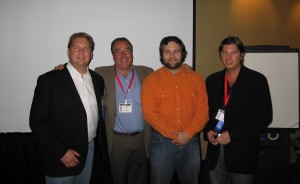 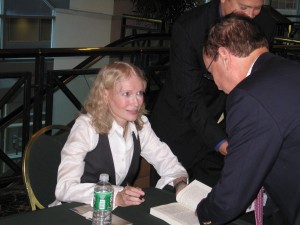 You gotta love the Acela. Boarded at 12 Noon at New York’s Penn Station, arrived in Philly at 1:20pm ($80 poorer). Alas, if only Amtrak could make it work going northbound.

Arrived at the downtown Marriott in the middle of PRSA keynote Mia Farrow”s speech. I was tempted to watch part of it, but there was this non-sequitur I couldn’t escape. I mean Ms. Farrow endured a fair share of PR advice after learning that her husband was dating, and then married their adopted daughter. But that’s not what was on her mind today.

She was here to talk about Darfur, and what better way to draw attention to that horrific, and still unfolding tragedy than to expose thousands of PR people to the images. Following her presentation, Ms. Farrow agreed to sign a few books. (See picture above.)

I then ran into the namesake of DS Simon who was prepping for his session on vlogging. I wished him well and wandered over to watch Eric Schwartzman moderate a lively panel on the social media press release featuring reps for three paid wire services and my former Ziff-Davis client who’s reinvented himself as an SEO/SEM guru, Greg Jarboe. (See above picture.)

It was a most informative discussion on the ingredients needed for the news release to gain a digital foothold. (I twittered a bit abiut it earlier.) Obviously, clean and concise writing topped the list, but SEO, multi-media assets, a network of channels, keywords, and keyword density added to the mix.

Finally, it was our turn. Rob Key, Lee Odden and Nicco Mele (see above), who arrived from Boston just as the doors were closing, sat before an SRO audience gathered to hear “all PR pros needed to know about social media.” Well, not all. I moderated. We covered online and virtual communities, blogger relations, bypassing the media filter, citizen journalism, media stratification, blogger press credentials, traditional PR competencies, politics, Google, the wisdom of the crowds, search engine reputation management, some good books, SEM/SEO…and Rosie O’Donnell.

The panelists did a fine job, and I’m sure the attendees walked away with a much-improved perspective on the brave new profession.

Now off to the blogger dinner…more to report tomorrow.