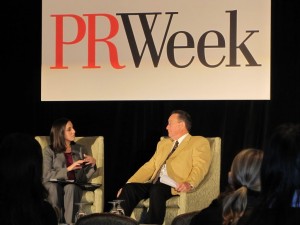 Must be the season for PR conferences. Yesterday I attended PRWeek’s Next Conference at New York’s Waldorf Astoria and was glad to see yet another great turn-out.

This followed our PCNY media event this week, which sold out, the PRSA Int’l Conference, which drew thousands, and the Council of PR Firms’ Critical Issues Forum that also played to a full house. Could it be that the economic tides have finally turned as Council president Kathy Cripps suggested yesterday?

This PR vet asked whether it’s worth posting one’s video beyond YouTube to which Vary suggested that there are 12 primary video-hosting sites he recommends — from Vimeo to Veoh. (Vary must like those V words.) Someone then asked about another “v” word — viral, and specifically what are its ingredients. Perry strongly advised against producing a video with the goal of seeing it go viral. Rather, he suggested, use digital video as a means to fill an informational or utilitarian need.

None of us could figure out whether the party-priming video for the Windows 7 (Tupper-wear like) launch was purposely produced as an exercise in banality. We all acknowledged its million+ views, not to mention the derision it spurred from more than a few influencers in the digital sphere. It simply had an old-school PR-centric VNR feel to it — not good.

We finally debated whether it made sense for someone from Walmart to avail him or herself on video in the immediate aftermath of last year’s Black Friday “stampede” sale in which a store employee was trampled to death. There was a question about whether words alone would be sufficient to satisfactorily quell heightened emotions. It was decided that they wouldn’t, and that tangible changes were in order. Those changes are now getting media attention.

I enjoyed the PR Week Next conference in spite of having to break for a lengthy client media interview mid-stream causing me to miss the panel featuring Sree Sreenivasan, dean of student affairs, Columbia Journalism School, Gordon Crovitz, formerly of Dow Jones and today the founder of Journalism Online, and Brian Stelter, media reporter for The New York Times.

It prompted me to start a new Twitter list on Listorious featuring Corporate Social Media Influencers. I also ran into my friend and former colleague (twice over) Peter Land who let on about his fresh new gig as SVP, communications, PepsiCo Americas Beverages.

Lisa, Julia, Erica, and Rose – good show! (More here.) Hope to see you at PR Camp in NYC next Friday.