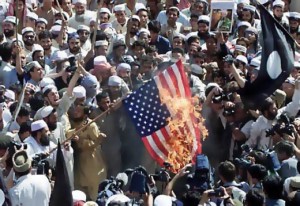 The U.S. gets an “F” in public diplomacy. That’s the assessment of the General Accounting Office, which yesterday issued its analysis of the government’s (futile) efforts to change negative foreign perceptions of the United States since 9/11. Here’s how the report opens:

Since the September 11, 2001, terrorist attacks, the U.S. government has spent at least $10 billion on communication efforts designed to advance the strategic interests of the United States. However, foreign public opinion polling data shows that negative views towards the United States persist despite the collective efforts to counteract them by the State Department (State), Broadcasting Board of Governors (BBG), U.S. Agency for International Development (USAID), Department of Defense (DOD), and other U.S. government agencies.

Granted, Mr. Obama’s relatively forward-thinking communicators have only sat in the driver’s seat for several months. Hence, much of the PR ineptitude cited in the GAO analysis invariably rests on the shoulders of the previous Administration. (Gee, that’s a familiar refrain.) Who can forget the insidious efforts by the Bush appointees to propagandize their way into the hearts and minds of America’s detractors?

The GAO report hopefully will serve as a wake-up call to those shaping the way in which we’re viewed around the world:

“Based on the significant role U.S. strategic communication and public diplomacy efforts can play in promoting U.S. national security objectives, such as countering ideological support for violent extremism, we highlighted these efforts as an urgent issue for the new administration and Congress.”

Of the six recommendations the report made, I was enamored with the last, which cites “social networks and technologies” like “Facebook and Twitter” as a potential remedies for curing what ails our PR campaign to gain foreign friends and influence:

(6) Interagency efforts to adopt a new approach to public diplomacy– Dynamic shifts in how target audiences obtain and use information have led many public diplomacy practitioners to conclude that the United States must more fully engage emerging social networks and technologies (such as Facebook and Twitter) in order to remain relevant. Referred to as “Public Diplomacy 2.0,” this new approach to strategic communications is exploring ways to operate in this evolving information environment. However, substantial questions exist regarding the challenges associated with this new approach.”