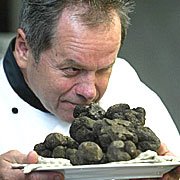 The name Wolfgang Puck is synonymous with trendy gourmet California cuisine. Whatever venture the famed restaurateur lent his name to invariably turned to truffles…until now.

The combustible (and decidedly non-delectable) combination of food prep and high tech has prompted some lawsuits that out-caffeinate even the litigation-prone scalded coffee drinkers at McDonalds. Jonathan Weisz, CEO of OnTech, the San Diego technology company that designed the self-heating package mechanism, exclaimed: “The cans do not explode.”

Hmmm. Tough assignment, Robbie. Not easy building consumer demand now that the catalytic chemistry is out of the can.

…it “relies on a mixture of water and quicklime, which is mostly calcium oxide. When latte drinkers push a button on the can, water is released inside a sealed inner cone filled with the chemical. The reaction produces enough heat to warm the latte to 145 degrees in six to eight minutes.”

One customer “got an intense burning sensation in her throat from leaking calcium dioxide.” What a way to start the day. Sure beats a double espresso!

Some of the eco folks also have taken issue with the packaging. USA Today’s DC-based marketing reporter Bruce Horovitz, who spent many years on the ad beat at The L.A. Times (where he likely met Mr. Puck), chimed in earlier this year with an uncharacteristically benign story on the latte for the lazy .

Wolfgang, perhaps adding your name to a line ‘o joe at Dunkin Donuts would have left a less bitter taste?