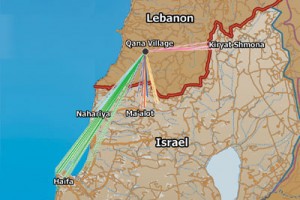 In the very early reports of civilian deaths at Kafr Qana, I was relieved to hear that Israel released video showing Hezbollah rockets being fired from in-between residential buildings in the village of Qana.

Finally, here was a way in which Israel could unequivocally put the blood of innocent Lebanese women and children squarely on the hands of the Hezbollah terrorists.

Soon, however, that video, or most references to the “human shield” story line, yielded to words like Israel “condemnation” and “massacre.” (It didn’t help that Kofi Annan, who commands a good share of the dedicated U.N. press corps, is in bed with the terrorists.)

What happened? Why is Israel only able to effectively fight this war on the military front, but lose in the court of public opinion? The News Hound posted a piece on a Fox “Special Report” that aired last night during which The Weekly Standard’s Fred Barnes opined:

“They should have said look, the blood is on Hezbollah’s hands, they knew that it’s a war crime to use civilians as a shield, and that’s what they were doing. It’s Hezbollah’s fault, not Israel’s. But, instead they apologized.”

I don’t disagree that Israel should have banged the “human shield” drum much, much louder. In fact, add to it the timpani of Hezbollah’s missiles aimed directly at innocent civilians within Israel. (Is anyone asking Hezbollah to apologize for its intentional murder of civilians?)

It was correct, however, for Israel to apologize for this tragic accident, but the Jewish State erred in not quickly sequeing to the real culprit here by hammering home how Hezbollah has embedded its warriors in neighborhoods — using words, pictures, video and RSS.