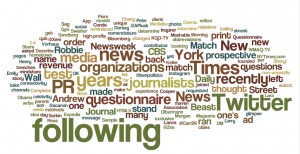 Here are the answers to the PR 3.0 Questionnaire:


Rank the following in order of their unique visitors per month:

Match the following people with their place of work:

Flipboard – A social magazine app for the iPad

@Zee – The Next Web’s Zee Kane

What are The Shorty Awards?

Where can one find The App Store?

A way to build community on Twitter around a person, place or thing.

Match the following journalists with their news organizations:

Which does IAC NOT own:

What do the following abbreviations stand for?

Lance Ulanoff is the new editor of Mashable.

Anderson Cooper is the son of Gloria Vanderbilt.

Robert Scoble first made a name for himself blogging for Microsoft under the name Scobleizer.

Keith Olbermann has his own show on Current TV.

What is the standard email nomenclature for journalists at:

What is Mediaite and which ABC News contributor founded it?
News site devoted to media started by Dan Abrams

Which print magazine has the largest U.S. readership? AARP

When is it OK to pitch a story idea via a Twitter direct message?
It’s not.

Having fun yet? YES!