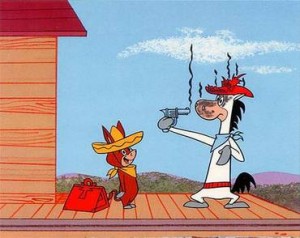 The spat between TechCrunch’s Michael Arrington sparked by The New York Times‘s tech editor Damon Darlin seems like eons ago, in spite of only hitting a crescendo in the last two weeks. (I guess today’s continuous news flow creates short-memoried news consumers.)

You may remember that Mr. Darlin decided to compare the journalistic proclivities of bloggers versus those of mainstream news reporters. Darlin wrote:

“For some blogs, rumors are their stock in trade. In October, for instance, Silicon Alley Insider discussed a rumor that first appeared in a â€œcitizen journalismâ€ section of the CNN Web site that Steven P. Jobs, the chief executive of Apple, had had a heart attack. He hadnâ€™t.”

“Mr. Arrington and the other bloggers see this not as rumor-mongering, but as involving the readers in the reporting process. One mission of his site, he said, is to write about the things a few people are talking about, â€œthe scuttlebutt around Silicon Valley.â€ His blog will often make clear that heâ€™s passing along a thinly sourced story.”

Having the pundit pulpit that he does, Mr. Arrington decided to use it:

“I can’t help wondering if our occasional criticism of the NYTimes prompted their most recent attack, this time aimed squarely at us. Not only does writer Damon Darlin get a lot wrong, he just absolutely failed to write the real and far more interesting story that was staring him in the face.”

The debate in essence pitted the quickdraw approach versus the more thorough, yet sluggish process newspapers and their ilk use before pulling the trigger. As the “first write of history,” mainstream journalists strive to get it right the first time, and leave corrections or extended coverage for later as necessary.

If a rumor has a hint of truth, bloggers (and increasingly microbloggers) seem more comfortable with letting the crowd decide. First breaker status seems to hold greater allure than the mandate to get it (completely) right.

I was reminded of this debate after reading another Times story today that revealed how The State newspaper of Columbia, South Carolina sat for months on an alleged amorous email exchange between the now infamous Governor and his Argentinian lover.

“‘We had not determined they were authentic,’ Leroy Chapman, the political editor at The State, said of the e-mail. ‘What it was, was a puzzle piece that was hardly discernible.'”

What if The State had published the email exchange back then and let its readers weigh in on its veracity? Does that reporting model serve the public better than the traditional model, which demands information be withheld until truly verified?

I personally believe that both models have their merits, but with one caveat: the first write of history, or post of a rumor as the case may be, invariably leaves the most indelible impression. It’s that embedded impression that’s often hard to shake even if subsequent facts don’t support it. What’s more, that conjecture lives permanently online, findable by anyone via Google.

Hence, I err on the side of caution. Let the journalists do what they’re trained to do: report the facts when they’re fully baked. Here are some links that further expound on the subject:

Finally, regarding the Michael Jackson news of late today, these related tweets caught my eye:

UPDATE: And the debate rages on anew today (Friday).