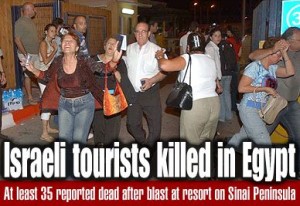 As missiles rain down on the Israeli town of Sderot, the empathy one would expect for the villagers doesn’t exist. This, of course, is due to the retaliatory actions (and bad aim) of the Israeli military. It’s gotten to the point where even the country’s “national PR man” has thrown up his hands in futility:

“Even Nachman Shai, nicknamed ‘the national PR man’ is having a hard time doing PR for Israel abroad: ‘It is not possible to explain what happened here and receive support for it.’ Shai stated that no one knew how to explain the fact that so many civilians had been killed by the IAF lately.

In its headline today, the Jerusalem Post acknowledges how difficult it is to win the war of public opinion when civilians get killed. After all, pictures of the damage caused by the missiles being fired from Gaza by the Palestinians are rarely broadcast.

“It is hard to expect people to feel empathy towards the children of Sderot when the news pictures being sent from Gaza every day show children being killed or wounded in IAF operations,” one of the ambassadors said.

Even so, Gideon Meir, the Israel Foreign Ministry’s director-general of media and public affairs managed to put a positive spin on his nation’s reputation by saying on Army Radio:

“…that the view on the situation in the Middle East from Europe was predetermined. ‘Europe judges everything that happens in the Middle East through its colonial past. Having said that, there has recently been a significant improvement in our relations with Europe. I think that in the long run, our image in the minds of the public is better than it has been in the past. For example U.S. public opinion hasn’t changed since the Six Day War,’ he said.”

My advice: find a way to step up your efforts to capture and quickly disseminate to the world media words and pictures of the damage these bombs bring (and don’t forget the heinous celebration by the bombers). Layer your “disproportionate” military response with an aggressive, but proportionate media relations response to balance the imbalance created by your (more media-savvy) attackers. In other words, stop letting them eat your lunch!