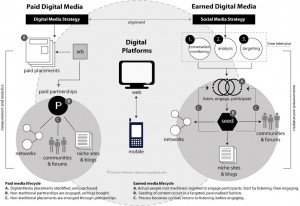 Social media guy Dave Armano, fresh off the news of his impending move to the “social media capital” of the United States — Austin, TX — today Flickr’ed some imagery (at left) to illustrate Brian Morrissey’s astute post “Blending paid and earned media in the stream.”

Morrissey’s post, which took its cue from a Fred Wilson post and a Business Week/Facebook interview, re-cast the relationship between paid and earned media and their respective abilities to enter the social media (buzz) stream:

“…Earned media is an old PR term. It’s typically the stuff a company does that gets people talking about it. in the past, that’s been through the mainstream media. Nowadays, we’re all media. What’s interesting is, despite what many of the social media gurus will say, companies need to do more than just be awesome to get part of the stream. Yes, that’s important, but advertisers will still need to buy their way in through paid media…”

Wilson had this to say about the new earned media paradigm:

“Earned media is media you don’t buy but earn the hard way. PR is an example of earned media. Word of mouth is another. Earned media has been around forever. But it has now gotten a lot easier, thanks to the Internet and social media, to earn media for your brand, product, or self.

I have earned a fair bit of media over the past five years. Google Analytics tells me that 120,000 people have visited this blog in the past 30 days…That’s a fair bit of media and I earn it every day by posting something thoughtful or thought provoking on this blog or twitter or tumblr or somewhere else on the web. If I stopped doing that, the media would slowly flow away from me to all of the rest of you who are earning media every day.”

This is not an unimportant conversation. What ingredients are needed to propel the client’s content into the buzzstream? Existing marketing models measure media impressions, but where does engagement with a brand or POV figure in the mix? Morrissey:

“…That means the type of ads that will work in the stream are different…Honda bought its way into the stream with a virtual gift option on Facebook. About 750,000 Facebook users chose to interact with that and created an additional 2 million impressions for the brand. Is that earned media or paid media? Maybe both.”

“Both” is nothing new. In the old model, (the best) Super Bowl advertising spurs a hybrid of paid and earned media. Now with social media added to the mix, the paradigm has changed. Here are ten examples of companies that successfully paid and earned their way into the buzzstream.

On April 27, I will sit on a Baruch College panel that hopes to touch upon some of that elusive elixir for going social. I hope you can make it.