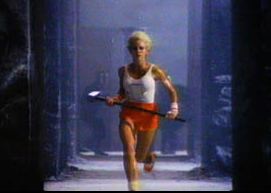 Companies that store consumer data have a real PR conundrum on their hands when confronted with government demands for that data. Following the criticism of Google for neutering its search engine to appease China’s lack of a First Amendment, the search monopoly regained its right to use its “Don’t Be Evil” motto by declining the U.S. government’s request to breech its users’ search habits.

Today the Electronic Frontier Foundation, no stranger to this weblog, filed a lawsuit against the once venerable and newly aspirant AT&T for having caved on this very issue. The L.A. Times broke the story during Christmas week when you and I and most Americans were not paying much attention.

With half the country not seeming to mind the growing 1984 scenario (guess which half?), the choice to comply or fight is ever more complicated. It will be interesting to watch how AT&T balances its customers’ privacy and the government’s alleged need to know. Thus far, no comment:

“AT&T said Tuesday that it needed to review the complaint before it could respond. But AT&T spokesman Dave Pacholczyk told CNET News.com last week in response to a query about NSA cooperation: “We don’t comment on matters of national security.”

This story is far from over.