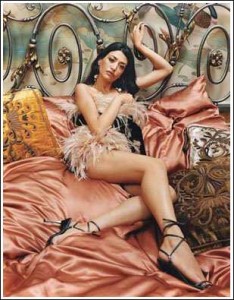 His celebrity status is undeniable. Posters of him adorn the walls of the homes of millions. Some parents named their sons after him. He’s one of the most sought after in his line of work, and is personally worth millions. ABC’s John Miller once landed a rare interview with him looking relaxed and confident. Arnold Schwarzenegger? Ronald Reagan? Howard Hughes? Kurt Angle? George W. Bush?

Why shouldn’t the niece of Osama Bin Laden capitalize on her infamous uncle’s bad name to advance her career? In an industry where nepotism and connections reign supreme, news reports have Wafah Dufour landing a starring role in a new reality series. So what if he didn’t personally pick up the phone on her behalf. After all, he is kind of hard to pin down.

I say give her a chance now that her publicity ploys have landed her a paying gig. Could it be any worse than the star turns of Tara, Paris, Lizzie and Joey? In fact, maybe she should have kept her surname. It’s a real conversation starter, if not door opener.