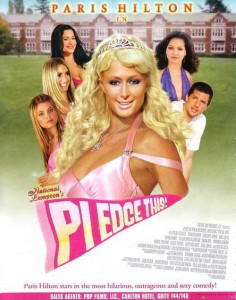 So what constitutes reasonable promotion and publicity: a pop on ET, feature in the LA Times, an OK magazine spread, all of the above? That’s the question the lawyers for the company that produced “National Lampoon’s Pledge This” want answered as they sue Paris Hilton for non-performance…of her PR duties.

No one can accuse the blonde bubblehead of shirking her PR and promotion duties when it came to exploiting her own exploitation by that gray bubblehead John McCain. But I digress.

Back to the lawsuit and Ms. Hilton’s contract that obligated her to promote this chihuahua of a film:

The Miami-based concern said it paid Hilton and her company, Paris Hilton Entertainment Inc., $1 million for “Hilton’s acting services” and for “reasonable promotion and publicity” for the movie, which was released in 2006 and featured Hilton as the president of an exclusive sorority.

Typically, stars will agree to avail themselves for a certain length of time, e.g., two media days, or a defined number of interviews — sometimes by medium, e.g., one TV, two print, one radio….

In this case, and incredulously, it appears the movie’s producers have claimed Ms. Hilton didn’t generate sufficient buzz, and therefore is in breach of contract. Good luck. Maybe they should hire Elle Woods to argue the case.