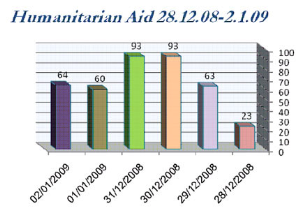 The news emanating from Israel’s former and once-again terrorist-controlled territory may have fallen from the front pages of the world media (barring today’s Times piece), but a struggle to prevail in the court of public opinion remains very much alive.

The latest chapter revolves around the distribution of humanitarian aid — and which group can exploit it for its own aggrandizement.

This morning, the United Nations Relief and Works Agency (UNRWA) accused Hamas of forcibly seizing the supplies it intended to deliver directly to 500 families in a hard-hit refugee camp. From UNRWA:

“Over 3,500 blankets and 406 food parcels were confiscated from a distribution store at Beach Camp in Gaza by police personnel,” the United Nations Relief and Works Agency said in its first such statement since a ceasefire went into effect on Jan. 18.

“This took place after UNRWA personnel had earlier refused to hand over the aid supplies to the Hamas-run Ministry of Social Affairs. The police subsequently broke into the warehouse and seized the aid by force,” the statement said.

Hamas leaders and spokespersons, like their terrorist propagandists, the late Yasser Arafat and Iranian president Mahmoud Ahmadinejad, among others, have few qualms about straight-out lying to the news media if it advances their real objectives – PR or otherwise.

“Kurd, accusing UNRWA of being reluctant to cooperate with his ministry, told Reuters: “Not a single policeman nor any employee of the Welfare Ministry entered any facility or centre belonging to UNRWA.”

On the flip side, Reuters reports in Israel’s influential Haaretz newspaper, that the EU Middle East envoy has accused the Israelis of dragging their feet in allowing construction materials to flow into their former territory:

“Israel must lift its ban on materials to rebuild Gaza after its offensive in a territory resembling “hell” where children have to sleep outside shattered homes, the European Union’s Middle East envoy said in Jerusalem on Tuesday.”

To its credit, Reuters did report that “Israel has opened Gaza’s border crossings to larger amounts of food and medicine…” but Reuters’ hellish headline, “EU envoy: Israel must ease aid restrictions on ‘hell-like’ Gaza,” overshadowed this not inconsequential reality.

Frankly, I believe that Israel should open the flood gates to allow aid – of whatever kind – into Gaza, and re-double efforts to let the world know about it. With that said, I suspect Israel’s reticence has more to do with allowing Hamas to exploit the Jewish state’s benevolence so the terrorist group can re-assert its hegemony. On this, even the EU envoy concedes:

“When it comes to providing additional public money, governments need assurances about where this money is going, and Hamas is not a government, Hamas is a movement,” Otte said.