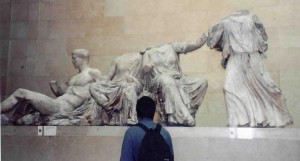 One of the world’s most esteemed museums has a very significant public relations dilemma on its hands, and it is not alone. It seems that some of the pieces housed at the Metropolitan Museum of Art in New York may not have been acquired on the up and up. Specifically, the provenance of several 5th century B.C. artifacts has been called into question by the Italian government.

A meeting is scheduled between the director of the Met and a lawyer for the Italians. Until that time, MMA’s mouthpiece, Harold Holzer, is withholding public comment. Given the Italian government’s own recent history of corruption, I find this story somewhat ironic. Nonetheless, let’s watch how deftly MMA navigates the museum world’s dirty little secret. Lord Elgin, you’re next.