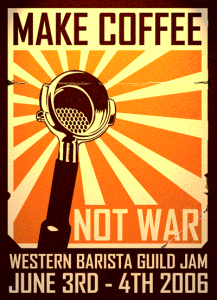 It’s been three weeks since that PR stunt in which Starbucks nationwide closed at the same time for some “retraining.”

Today, as an extension of the ubiquitous green-signed company’s makeover efforts, founder and chief inspiration officer Howard Schulz declared that Starbucks would “return to its roots.” According to today’s New York Times:

“The initiatives are intended to restore an authentic coffeehouse experience to the stores and, in turn, re-energize an ailing stock that has lost half its value in the last 15 months.”

Or as Mr. Schultz “obliquely” put it:

“A lot of people are making unique claims about coffee and what they do,” he said. “Whatâ€™s interesting to me is that they are not coffee roasters.”

Well Mr. Schultz, it’s Starbucks that’s about to be roasted. In a separate, but ill-timed piece of news that stands in contrast to Mr. Schultz’s emancipation proclamation, The AP late today pours us a strong, decaffeinated brew:

“A Superior Court judge on Thursday ordered Starbucks to pay its California baristas more than $100 million in back tips that the coffee chain paid to shift supervisors.”

Huh? You mean that all those coins we’ve been pouring into the tip jar from our $3 down for a $2.05 grande drip, have been horded by the baristas’ bosses??? Yep. It appears to be so:

I wonder what visitors to Starbucks’ new community site (to which Ragan’s Michael Sebastian directed me today) will have to say about the California lawsuit ruling?

The site, btw, taps the roasted roaster’s coffee-consuming crowd for ideas. How’s this for one: give your baristas more incentive to step up the pace. It’s slow torture to listen to those chain-saw sounding espresso-makers drowning out the new artists you once broke, while waiting, forever, for a cup ‘o joe.