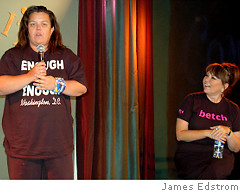 Could it be? The powers-that-be at “The View” made Rosie O’Donnell’s co-hosts on “The View” wear earpieces on the day Ms. O’Donnell got her come-uppance?

According to the Daily News’s dynamic duo of Rush & Molloy, this is exactly what the corpulent comedian claimed at Comix last night. The revelations emerged in a stand-up routine organized by Ms. O’Donnell’s bosom buddy Roseanne Barr who invited her on stage in NYC.

“Rosie started off by saying, ‘When I was fired by Barbara Walters” – the first time she didn’t stick to “The View’s” spin that her departure from the show was by mutual agreement.

Rosie claimed onstage that Walters and other ‘View’ couchmates wear earpieces through which producers tell them what to say, which she refused to do.”

Apparently, the program’s producers were in a command-and-control mindset to ensure that nobody strayed from the script. Come to think of it, that segment didn’t really appear too natural.

The tactic of clandestinely feeding the message to gain an advantage is nothing new. (I mean what was Wizard of Oz up to?) Maybe one day the truth of the 2004 Presidential debates will emerge?