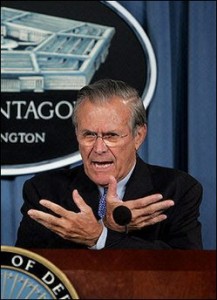 In spite of the rapidity with which crisis-producing news disappears from the media (and public’s) radar nowadays, it was evident to me from the very first inklings that H-P’s Patricia Dunn would take a powder — if only to let the beleaguered company expeditiously put the news behind it.

You may call me crazy, but I’m having some of those same feelings right now about the U.S. Secretary of Defense. (No, this administration has not suddenly discovered the notion of corporate governance.)

Bob Woodward’s well-researched and articulated (on “60 Minutes) revelations alone will not do the trick, but they may just be the straw that broke this old camel’s back.

I’ve been wrong before, but it’s a reasoable assumption that as we speak, W and his consiglieres are weighing options to quell the growing public firestorm. Canning Rumsfeld just seems like a canny move right now…even considering this President’s inexplicable and perilous obstinance.

Stay the course is about to be sidetracked…I think. The choice of The Donald’s successor, however, will need to have gravitas up the wazoo, and Colin Powell isn’t about to return to this administration anytime soon. (Though I’m sure he was on the short list.)