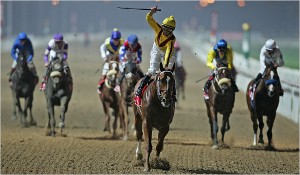 For as long as I can remember, PR pros have bemoaned the lack of attention the newspaper-of-record has devoted to their chosen profession. Sure, Stuart periodically reports the obligatory agency acquisition announcement, executive promotion item or PR scandal.

But compared to our siblings on the other side of the marketing aisle, public relations coverage in The Times is pretty much nowhere. Or is it?

Today, Stephanie Clifford, who succeeded Louise Story in late March as the advertising beat reporter (versus Stuart Elliott, its advertising columnist), reported on the PR challenges faced by Derby sponsors Yum Brands following the conclusion of this past weekend’s Run for the Roses. Basically, YUM’s CEO took to the Winner’s Circle to proclaim live on NBC:

â€œWell, Bob, what a great day for the commonwealth of Kentucky and the world. On behalf of Taco Bell, Pizza Hut, KFC, Long John Silverâ€™s and A&W, Yum Brands is the proud sponsor of the greatest event in the world. Thank you very much,â€ he said, ticking off Yumâ€™s brand names.

How could he know that the Derby’s second place finisher lay mortally injured on the track, and would soon be euthansized? Amidst all the mint juleps, nobody informed him of this unforeseen and most unfortunate turn of events. As a result, the blogosphere took “they’re off” literally and pounced on Yum’s case:

â€œBased on the YUM repsâ€™ disgraceful smiling and product plugging â€” while Eight Belles was dying yards away from them â€” Iâ€™ll never buy ANY of their products again,â€ wrote one.

â€œIâ€™m happy that the CEO of Yum is just smiling and not even caring that a horse was just killed on the track,â€ wrote another. with many promising to boycott the company’s brands.

(Sure makes an armchair quarterback think twice before second-guessing a company’s behavior, i.e., without having direct knowledge of the facts that informed such behavior.)

Nonetheless, this is the second PR-related piece that Ms. Clifford has written since assuming the beat some six weeks ago. The first had something to do with a little torch run. Stephanie, we welcome the attention especially since ours remains the most misunderstood of the communications disciplines. Keep it up.

BTW – I’m perplexed by the absence of any reference to this weekend’s tragedy on the official blog of Churchill Downs.Hmmm. Come to think of it, the sponsor of the winning horse was conspicuously silent about the tragedy, instead relying on a stale news release to explain its involvement. Maybe I missed something.