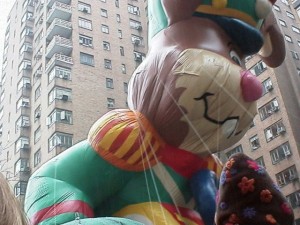 The advance press coverage for the annual Macy’s Thanksgiving Parade runs like clockwork. It makes its sibling summer spectacle, the 4th of July Fireworks, pale in comparison. We first get wind of the parade with a media preview at the Hoboken warehouse where the buoyant behemoths are born. Then there’s word of which helium heroes will be newly honored. And finally, tonight, thousands of supposedly savvy New Yorkers gather on the Upper West Side to witness the inflation.

This year, there’s a monkey wrench in the mix, and it’s not Curious George. It arrived unwanted I’m sure on the front page of The New York Times. The giant department store allegedly reneged on its agreement to train balloon handlers following an incident some years ago wherein the wind wrested a float from its minders causing serious injury.

With strong winds and rain on tap for tomorrow, the PR folks at Macy’s this morning are in crisis mode to assuage concerns that the parade route may not be safe and assure parade-goers that the hired hands can tame their charges. Where is Spiderman when we really need him?