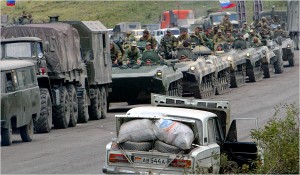 With the world media fully invested in Beijing (e.g., “…the press workroom is the largest in Olympic history with 971 broadband-equipped workstations, 680 high-speed network connections and an additional 206 for photographers…”), the Russians gambled that the court of public opinion would be sufficiently sidetracked to permit a brazen attack on Georgia, its pro-Western, NATO-allied former republic.

He may be right. How could a Russian assault on a sovereign nation possibly compete for media consumers’ attention against the Olympics’ opening ceremonies?

In addition to the PR-driven strategy to attack when the world was not looking, the Soviet (I mean Russian) propagandists widely availed themselves to the media to hammer (and sickle) home the notion that the Georgians are the true aggressors. The despotic former KGB’er Putin took a page from Dick Cheney’s Iraqi playbook to propagate on state-controlled “Russia Today” that Georgia is Goliath and Russia is David:

“I’m amazed by their skills to see black as white, to portray aggressors as victims, and blame the real victims for the consequences of the conflict. As we all know, Sadam Hussein was hanged for burning down several Shi’ite villages, but now the situation is different. The Georgian leaders, who in a matter of hours, wiped out South Ossetian villages, who ran over children and the elderly with tanks, who burned civilians alive, now those people have to be protected”

Reuters Moscow bureau reports that each side in recent days has retained outside PR representation to help tell its side of the story:

“Both sides are employing Brussels-based public relations specialists who arranged a succession of conference calls for the international media in recent days, with senior government figures striving to put their side of the story across first.”

Yet Georgia’s PR guns are no match for Russia’s.

Across Russian television channels, big headlines have appeared decrying a “genocide” in South Ossetia, with images of wailing women, bombed buildings and frightened children edited together in quick succession.

In Georgia, only one television channel was operating at the start of the conflict and all .ru Russian Internet sites were briefly blocked, though they were available by Sunday evening.

Having succeeded in portraying the Georgians as the genocidal aggressors, we learn today of Mr. Putin’s true intentions: regime change in Georgia. This morning the Russians bombed targets in Georgia’s capital of Tblisi. Where’s Charlie Wilson when we need him? As for Putin, why let a few facts get in the way? They certainly didn’t for this Administration.