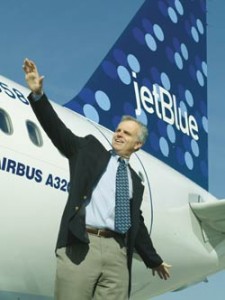 There are some unwritten, but useful rules for new business presentations. One favorite of mine is to avoid “piling on,” e.g., when every agency person in the room feels compelled to offer, in succession, his or her answer to the client-prospect’s question or concern. The net effect: little time for questions to the client from the agency.

At the risk of piling on, I’ve watched every flavor of PR opinion emerge about JetBlue CEO David Neeleman’s handling of his bona fide (consumer and investor) crisis. This blogger weighed in early with an observation that Mr. Neeleman was out there too soon assuaging the media filter with promises he (perhaps unknowingly) couldn’t keep. In spite of Mr. Neeleman’s ubiquitous apologetic state, JetBlue was fully enveloped in an operational meltdown, and would be for several days.

I was particularly enamored with one post from earlier today that had Mr. Neeleman dismissing the need for outside PR counsel — at a time when his current crisis seemed unfathomable.

Nonetheless, with all the PR pontificators now pretty much having weighed in, I predict that the JetBlue brand will come back strong, if not stronger than ever before. You see this company is different from Dell, a company where the consumer was firmly ensconced in coach class…for the longest time.

JetBlue’s passengers, and The Street, simply hold their airline in greater esteem. How so? From day one, the airline has taken extra pains to build that customer support and trust. One week-long incident, while terribly painful (and “mortifying”) while it’s happening, cannot erase the goodwill this scrappy airline has been depositing in the bank for use on a rainy (or icy) day. Also, remember that time — and a 24/7 news cycle — can be a crisis manager’s best friend.

JetBlue still has more work to do, like introducing some tangible reforms to prevent this from happening again. But David Neeleman, in spite of having jumped the gun without all the info at his fingerprints, came off as contrite, honest, and committed to his customers. That’s what we’ll remember as JetBlue lands safely then proceeds to soar to new heights.

Finally, David, next time (God forbid), use your blog. Like YouTube, it’s more scalable than jetting from one media interview to the next.

Postscript: Peter Greenberg who knows more about the machinations of the airline industry than anyone I know offers this. He’s also wired into the travel PR community and posts an e-mail from one of our own who was sequestered on one of those ill-fated JetBlue jets. Here’s the link from Peter’s new website.