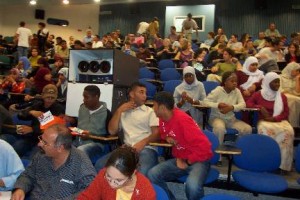 Been on the road much of the day, so apologies for the late posting. I also missed the Publicity Club of New York luncheon today where editors from Allure, Fast Company, Self, Quick & Simple and Wired shared with the New York PR crowd their editorial plans for the holidays.

This piece in today’s L.A. Times caught my eye for two reasons: It begs the question this blog previously has covered regarding which journos merit press credentials, access, preview screenings, etc. in an age when simply everyone’s a journalist.

The second issue involves the time-honored practice by film studio publicists of granting media access, but only as a quid pro quo for other give-backs, e.g., press and review embargoes, limits on interview questions, etc.

As all journalists migrate to the web, 2oth Century Fox’s PR department has discovered that its simplistic delineation of journos into one of three media channels — print, broadcast and online — has backfired. The Chicago Film Critics Association is boycotting the studio for limiting online access to film screenings. Other cities’ film critics association are joining in the boycott.

So if Fox lets any reasonable credentialed reporter into its screenings, will we see some shrill film director crying foul when the critic breaks the review embargo before the film’s release date? Stay tuned.