So Kwittken & Co’s namesake founder appears on CNBC to nudge Goldman Sachs’ beleaguered CEO Lloyd Blankfein to get out there more.

So which shall it be fellas???? And shouldn’t there be a PRSA ethical code forbidding PR pros from publicly second-guessing companies in crisis without primary knowledge of the facts driving strategy? We’ll save that discourse for another day, since this PR pro may also be guilty of a similar transgression.

You may remember the first eruption enveloping Goldman. It was one theme covered at the Council of PR Firms‘ recent Critical Issues Forum. Since that time, the world’s most prestigious bank did announce a fairly substantive initiative that apparently proved insufficient in stemming the tide of public (and now governmental) scrutiny and distrust.

At the time of the Council event, I (pointedly) pointed out that simply throwing money at the problem — no matter how much — would be painted by the media as a PR ploy. And it was. In fact, who can even remember what it was that Goldman announced to try to neutralize the naysayers back then?

Flash forward to today. The company has two options, or so it’s been told:

In my opinion, there are two more desirable options:

Even NYC’s Mayor Mike gave the company a message cue this week when he warned the Feds that a weakened Wall Street is not just bad for the New York economy, but it’s bad for the U.S. and global economies.

There isn’t a single PR pill that will effectively treat what poisons Goldman’s reputation right now. But I gotta believe that Lloyd Blankfein has reached a stage where he earnestly wants to do the right thing, and not just for his employees and stakeholders, but for a public whose trust he’s learned can weigh heavily on the firm’s fate and fortunes. 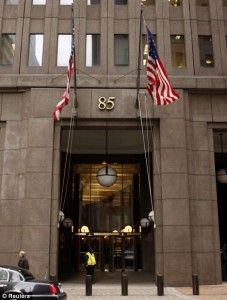 Let’s just hope that the legions of external PR consiglieres who’ve undoubtedly shuttled through the doors of 85 Broad Street in recent months have sufficient wherewithal to advise him to bite the bullet. (And while they’re at it, they might request Twitter to dismantle the fake @lucasvpraag handle that’s spewing all kinds of unsavory tweets on the firm.)