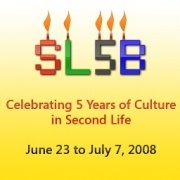 I’m gearing up to moderate a Business Wire panel on Tuesday morning called, “A Social Media Conversation: How PR, IR and Marketing Professionals Can Engage and Participate in the Social Web.” (Now that’s a mouthful!) The punditry includes:

In preparing questions, I reviewed some Q’s used for previous panels. One particular question explored the relevance (to PR pros) of Second Life and virtual worlds in general. After all, it was barely two years ago that every major PR agency had some mischegas brewing in the land of lonely avatars. Today, we don’t hear much about Second Life, well, at least not about its value as a marketing channel.

This paucity of SL WOM buzz exists in spite of parent Linden Labs’ recent installation of a new and notable CEO with impeccable tech cred, and the fact that the virtual world will mark its 5th anniversary starting Monday with a two-week virtual “World Fair” for which it will:

“…host a series of roundtable discussions, parties and exhibits that showcase the vast creativity of Residents as well as groundbreaking organizational uses of the Second Life platform.”

Linden Labs ironically trumpeted the news via a standard Business Wire news release on a Friday, no less. Hmmm, maybe they’re trying to bury the story over the weekend? No matter. How else can Second Life re-assert its virtual supremacy?

Some naysayers, including the folks at Silicon Alley Insider, remain skeptical about Second Life’s ability to enhance its relevance to marketers. I’m wondering if all the attention came too soon and too fast, and the current malaise in which SL finds itself is simply the natural bi-product of the fickle media’s ebb and flow (with SL now in the ebb phase.)