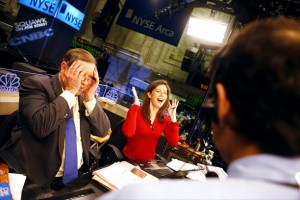 The Times’s Andrew Ross Sorkin today draws our attention to the exuberance displayed by those financial titans whose companies were a hair’s breath from insolvency.

In the piece, he cites buoyant prognostications by the CEO or CFOs of Wachovia, Lehman Brothers and Bear Stearns, all of whom made the media rounds to extol the virtues of their (failing) enterprises.

“It is a conundrum that C.E.O.â€™s of troubled companies seem always to face. In an effort to bolster public confidence in their businesses, they give interviews and try to put on a happy face â€” right before their companies go off a cliff.”

If I were an investor watching these corporate chiefs wax poetic on CNBC or elsewhere, I’d probably feel pretty good about their companies’ prospects and maybe even toss a few dollars their way. I’m sure I wouldn’t be alone in feeling assuaged by Alan D. Schwartz, Bearâ€™s chief executive, who went on television to say just weeks before his company collapsed into the arms of JP Morgan:

â€œWe donâ€™t see any pressure on our liquidity, let alone a liquidity crisis.â€

Who can blame him for putting on a happy face? In ruling a company from the top down, why sound contrite or even transparent? The point is to instill investor confidence through the sometimes star-struck media filter. Anyway, isn’t it the journalist’s job to ferret out the misguided guidance?

But what happens when too few journalists actually understand the arcane financial instruments that brought the economy to its knees? Here’s Fortune magazine m.e. Andy Serwer interviewed this week by “On the Media’s” Bob Garfield:

“I think we’ve got people here who do understand derivatives, credit default swaps as well as anyone on Wall Street. Now [LAUGHS], having said that, the best minds on Wall Street got it wrong.

Youâ€™re right in saying that this is the ultimate in financial complexity, and it’s very hard to report, it’s very hard to make it palatable. There were a certain set of circumstances that occurred that were just right that created a perfect storm â€“ the mortgage meltdown, easy credit, derivatives that people didn’t understand.”

Jay Rosen tweeted a link to a CJR story in which the writer appears to lay the blame on the shortcomings (or worse, the possible irrelevance) of today’s business beat reporter:

“Either the business press institutionally provided appropriate arms-length scrutiny of the financial-services industry, including investigative work, opinion, analysis and rigorous beat reporting that provided decision-makers, including readers, with fair warnings of the coming collapse, and it was ignored, or it didn’t do the work in the first place. We know that the answer is some combination of the two. But, if we accept the foregoing logic, then best case for the business media is that what it writes doesn’t matter, in which case, why bother?”

It matters little that Serwer remembers how his magazine predicted, in 1994, that derivatives would eventually bring down the economy.

Like the cow-towed political beat reporters who lacked the temerity to question the disastrous political maneuverings of this administration, the business beat reporter, especially those on television, somehow took their eye off the ball.

Hopefully, the sorry state of the nation points to the reason why we need a strong and vital fourth estate, not to mention transparent leadership from Wall Street to Pennsylvania Avenue.