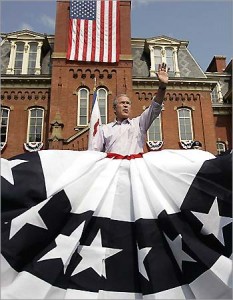 It’s simply the nature of the beast. As much as the Obama campaign insists it will forgo the saccharine opaqueness and command & control ways of the Bush PR machine, the need to “manage” his public image remains paramount if the Illinois Senator ever expects to get elected.

Some years ago, I had the fortune (excuse the pun) to lead the media strategy for the re-design of the U.S. currency. The Bureau of Engraving and Printing started with the $100 bill and worked its way down to the $50, $20, etc. I distinctly remember the “event” we held for the new $50. It took place outside of New York’s Radio City Music Hall on whose marquee the words read: “New $50 Today.”

On the opposite sidewalk with the marquee in the background sat then U.S. Treasurer Mary Ellen Withrow whose name appeared on the bill. We invited passers-by to exchange $50 for the newly designed $50 — freshly signed by Ms. Withrow. The line snaked down the sidewalk.

Separately, a colleague from our Washington DC office insisted that we stage a separate photo op wherein Ms. Withrow use the new $50 to purchase tickets to the Radio City Christmas Spectacular. (For whom, I don’t know?) With compliant news photographers put in their places, my colleague, an old political campaign PR operative, stage-directed Ms. Withrow to the box office to make the purchase. I stood there mortified by the blatant way in which he manipulated these photojournalists. He insisted that this is how it’s done in the Beltway.

Politico reported yesterday how some misguided Obama handlers asked two Muslim woman (with head scarves) to change their seats from behind the podium where the Senator was poised to give a speech. The New York Times picked up on it today, under the headline “Obamaâ€™s Campaign Tightens Control of Image and Access:”

While the strategy has won compliments from political professionals of both parties, who say Mr. Obamaâ€™s campaign is exhibiting a high level of discipline, it has also created some early turbulence for a candidate who has run on promises of openness and cultivated a grass-roots following and a cottage industry of homemade campaign videos, memorabilia and street murals.

The campaign apologized for the obvious gaff and promised to not let it happen again. Oh really?

So what is and what is not acceptable in the management of a candidate’s public persona? My feeling is to let Obama be Obama. Lay the groundwork, but then step back to allow for a certain amount of spontaneous combustion. Prep certainly and choose public appearances that fortify positions, but to do NOT phony it up.

Throigh this painful lesson, there remains one silver lining: the Bushies lowered the bar so low that any semblance of transparency will be seen as a breath of fresh air. Now, I wonder when will the media start scrutinizing Senator McCain’s PR ways and means?