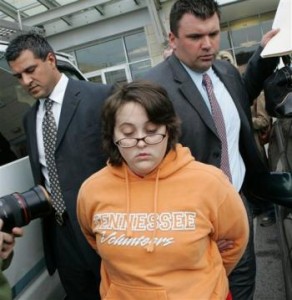 Have you been following this desperate and bizarre story? It centers around a twisted 20-year-old Texan who went to Pennsylvania to throw her support behind the McCain campaign, and instead may have thrown the campaign.

Apparently Joe the Plumber’s distant cousin concocted a story in which she was mugged and mutilated by a “6’4″ black man” for supporting McCain. She claimed the mugger carved a letter “B” (for Barack) in her cheek and released a photo to prove it.

The ethically challenged McCain communications camp apparently cried eureka! This was just the ruse they needed to emerge from the political pits. Their strategy: feed Drudge the exclusive, ask both McCain and Palin to call the woman to lend support, then put the PR team to work in Pennsylvania. Greg Sargent reports for TPM:

“John Verrilli, the news director for KDKA in Pittsburgh, told TPM Election Central that McCain’s Pennsylvania campaign communications director gave one of his reporters a detailed version of the attack that included a claim that the alleged attacker said, “You’re with the McCain campaign? I’m going to teach you a lesson.”

The McCain spokesperson’s claim is significant because:

“…it reveals a McCain official pushing a version of the story that was far more explosive than the available or confirmed facts permitted at the time.”

“A source familiar with what happened yesterday confirmed that the unnamed spokesperson was communications director Peter Feldman. Feldman was also quoted yesterday making virtually identical assertions on the Web site of another local TV station, WPXI.”

This is the same Peter Feldman who recently accused New York Gov. Patterson of playing the race card:

In comments to The New York Daily News, Peter Feldman, a spokesman for Mr. McCain and his running mate, Gov. Sarah Palin of Alaska, called Mr. Patersonâ€™s remarks â€œdisappointing.â€ He said that Mr. Paterson was â€œplaying the race cardâ€ by suggesting that Ms. Palinâ€™s comments about Mr. Obamaâ€™s career as a community organizer were a kind of coded racial appeal. â€œThis is a tactic that the Obama campaign has used before, and which McCain campaign manager Rick Davis correctly called â€˜divisive, shameful, and wrong,â€™â€ Mr. Feldman told The News.

Shame on Mr. Feldman for his lies and hypocrisy. What’s sad is that there are people who still believe Tawana Brawley was telling the truth, which tells me that many likely give credence to this young woman – something I’m sure the Republicans won’t disavow.