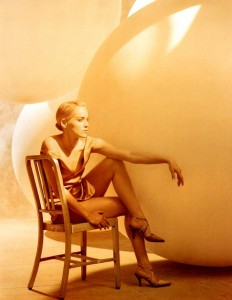 “Like an icepick to an aging sexpot’s career…” is how today’s New York Post characterized Sharon Stone’s “comeback.”

The roller coaster ride of celebrity has always fascinated me. One day you’re on top of the mountain, the next, in the gutter with spit on your face. What can we PR types do to manage the highs and lows, or better yet, sustain the highs?

For the longest time, perennial A-lister Tom Cruise could do no wrong. He commanded and controlled his way to the top of the list. Then all of a sudden, derailment.

Let’s look at Sharon Stone. Just a few weeks ago, she was America’s comeback sweetheart. Which media outlet didn’t fawn over this estrogen (and everything) replacement queen? She was the poster child for all sexually active women at or near the half-century mark. Today’s she’s suffering the slings and arrows of outrageous fortune. This sort of behavior , as reported in “Page Six,” doesn’t much help either.

Kurt Anderson has a worthwhile take on America’s waning celebrity obsession in a piece called “Celebrity Death Watch.” I have a simple theory. Too much exposure backfires. It doesn’t matter if it’s in the top tier tabs or glossy mags.

Some months back, I derided Jennifer Aniston’s publicist for malpractically overexposing his A-list client — a talented, sexy, girl-next-door actress who had it all…before being hyped to death. Fortunately, she found Vince to help breathe some life back into her celebrity.

Let’s admit it. It’s hard for PR people to rebuff the lure of magazine covers, newspaper profiles and network talk show stints for their bold-faced named clients. But, we must. Extreme selectivity and moderation always pays off over the long run. There’s a reason Jodie Foster, Robert Redford, Clint Eastwood, and many media-“shy” stars have become mega stars. They avoid the hype machine and its inevitable Newtonian backlash. Their body of work, not the work of their bodies, speaks for itself.