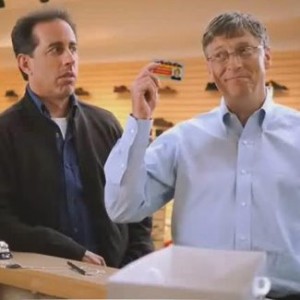 I suppose it was the news of Apple passing Google in market cap that prompted Newsweek to take a less-than flattering look at the perennially cool Cupertino company:

“In fact, Apple has started looking like what Microsoft was 10 years agoâ€”a company that so controls certain market segments that smaller competitors can survive only by living on its scraps or staying out of its way. (Apple declined to comment for this story.)“

I had to do a double take on the byline, since Newsweek‘s Steven Levy has been somewhat sympatico to Apple over the years. (What journo hasn’t?) It was Techtronic columnist Daniel Lyons who reasoned that Apple was ripe for a little comeuppance for its “monopolistic” ways.

The Newsweek piece may not have the virality of say a TechCrunch or Mashable, but it edgily makes its point. In a not unrelated piece of news, over the weekend the world had its first look at Microsoft’s new consumer advertising from its new agency, the creative creatures at Crispin.

The first execution, a 90-second TV spot, features Bill Gates buying shoes in the mall when suddenly Jerry Seinfeld pops in to assist with the purchase. Other than the star turn of the Microsoft founder, I’m not so sure what the spot has to do with Vista, IE8, MS Office, Zune, or the new Photosynth applications. Long-time Adweek ad critic Barbara Lippert had the same lukewarm imporession.

Those still-running Apple vs. PC ads precipitated Microsoft’s $300 million investment in the irreverent advertising genre. Those Apple ads clearly irked Bill Gates. The first spot in the new campaign may be a head scratcher, but you still gotta love the ID pic Bill Gates flashes in the shoe store. I think it’s his mug shot when he was arrested as a youth for a driving infraction.

I’m still thinking that Microsoft should have borrowed a page from Apple to stick it to the naysayers head-on…with a sense of humor of course. Must be my frustration with the Dems who have cowered from Steve Schmidt and the negativity emanating from the McCain camp. CNET also sees visions of Karl Rove:

“The agency [Crispin] is well known, and it is unclear whether Karl Rove pointed them in this direction, for taking the apparent weakness of a brand and turning it into its strength. So you take the supposedly cold, heartless bloke in the glasses from the Apple spots and you make him a bottom-wiggling Hardy to Jerry Seinfeld’s Laurel.”