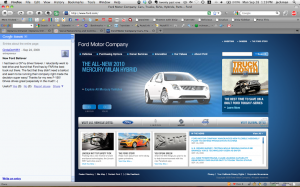 The digital marketing cognoscenti are nearly unanimous in their advice to newbie clients seeking to manage/advance their brands’ online reputations. Listen first! After all, how could a company know where to apply its marketing/PR muscle (and tools of engagement) without knowing what is being said about it?

Listening to (or monitoring) the online conversation is so essential that it has spawned a cottage industry of specialist providers. Among them: Radian6, Converseon, Visible Technologies, Crimson Hexagon, DNA13, Trackur, Scout Labs, and too many others to remember. The price of admission: the ability to capture and organize voluminous amounts of brand or product-specific consumer and news-generated content derived from Twitter, the blogosphere, websites, group discussions, web comments, and even offline news sites, etc.

Many “conversation mining” companies also claim to automate the process of “sentiment analysis,” but be wary of this. To date, this holy grail capability remains somewhat rudimentary, i.e., “positive, negative or neutral,” given the myriad nuances that define the nature of a conversation. This will change over the next year or two as AI algorithms grow in sophistication.

Today, MediaPost’s Laurie Sullivan draws our attention to a new, but potentially significant development for those of us charged with online reputation management. It’s Google’s Sidewiki toolbar about which Ms. Sullivan writes:

The toolbar, called Sidewiki, which launched in September, provides a venue for venting and posting derogatory comments on virtually any Web site that only those who install the toolbar can read. And although many realize that Google never intended that the toolbar be used for evil, some believe the Mountain View, Calif. company’s innovation could create a nightmare for marketers and Web site owners if they choose not to download and install the tool.

Google claims that its own algorithm has a built-in capacity to ferret out non-useful (or destructive?) comments on Sidewiki. A Google spokesperson:

“Rather than ordering entries chronologically, we use a unique algorithm that incorporates various signals about the entries to rank them in terms of usefulness. The signals include language modeling for the text, and information we know about the author, such as the quality of past Sidewiki entries he or she has written.

The community using the tool monitors Sidewiki entries by voting up content that is useful and informative, and voting down irrelevant or unhelpful posts. Similarly, the community can flag any illegal, pornographic or copyrighted content by using the ‘Report Abuse’ button.”

“What Would Google Do” author Jeff Jarvis even took issue with Sidewiki, less for the challenges its secret society of brand detractors might potentially pose to PR pros, and more for putting the conversation his site generates behind a “hedge.” On September 23, he posted on BuzzMachine:

“Google is trying to take interactivity away from the source and centralize it…It takes comments away from my blog and puts them on Google. That sets up Google in channel conflict vs me…It robs my site of much of its value… On a practical level, only people who use the Google Toolbar will see the comments left using it and so it bifurcates the conversation and puts some of it behind a hedge.”

Stephen Foley, iCyte CEO (and an Aussie in New York) has taken up the charge to prove that Google may be compromising its “Don’t Be Evil” mantra. In a post titled “Sidewiki Gone Mad,” he writes:

“I have a nice house. I have spent many years building it. I have a large fence out the front. Up until yesterday no-one could write on my fence, but that has all changed. Now anyone can write anything they like on my front fence….”

Others see the tool as a “next generation TripAdvisor.” While it’s too soon to predict Sidewiki’s uptake, reputation managers (and the mining companies they employ) should pay heed to the perilous potential this tool holds. In other words, sign up and listen.