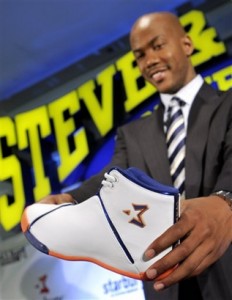 With the NBA season in full swing, Commish David Stern is out on the court dutifully spreading basketball fever far and wide. He’s also likely hoping that some of the superstar bad-boy incidents of years past don’t raise their ugly heads anytime soon.

Kobe and Artest’s troubles have faded, though Iverson’s making some noise in Philly. The abject futility of the media capital’s marquee franchise continues unabated, in spite of a glimmer of stardom from the 6’11” 285-lb. Eddie Curry. Still, while Rome’s burning, Nero plays on.

Here’s a simple promotion that has done (and can still do) more for the sport and the reputation of its petulant players than all the news conferences, suspensions, fines and slam-dunk contests combined.

The big idea is not from the usual deep-pocketed purveyors of such pumped up pomp: that swooshy Oregon company or that day-glo sweat-producing sports drink. It’s from Steve and Barry. Who?

You see Steve and Barry’s is a fast-growing supermarket-sized sporting goods retailer. They also own the rights to slumping superstar Stephon Marbury’s signature brand of sneaker — Starbury One. While top drawer basketball sneakers from Nike, Reebok, etc. can run from $100 to $200, or $5000, Marbury’s on a nationwide tour promoting his brand — at $14.98 a pair:

While the Knick coach and management may have issues with the injury-prone Mr. Marbury and his sudden lackluster play, this superstar has gained countless new fans (and a most favorable ruling in the court of public opinion. Last weekend he was at a local mall handing out pairs of Starbury Ones to the first thousand players from any high school varsity team.