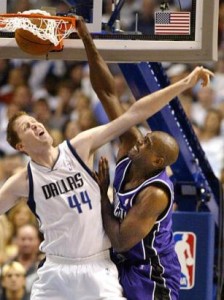 My old friend Gary Zarr, a Rubenstein alum who recently left the top PR and Biz Dev slot at the American Museum of Natural History to run marketing and PR for the NBA, has his first crisis on his hands.

It involves a new study by some Ivy League economists who claim a racial bias on the part of NBA referees — on both sides of the equation, but more pronounced by Caucasian refs against African-American players.

The prominence given the study in the paper-of-record no doubt is fueling the crisis, which prompted both NBA Commish David Stern and the league’s head of basketball operations to quickly and emphatically weigh in with the league’s own study:

“We think our cut at the data is more powerful, more robust, and demonstrates that there is no bias,” Mr. Stern said.

“‘The study that is cited in the New York Times article is wrong,’ president of league and basketball operations Joel Litvin told The Associated Press on Tuesday night. ‘The fact is there is no evidence of racial bias in foul calls made by NBA officials and that is based on a study conducted by our experts who looked at data that was far more robust and current than the data relied upon by Professor Wolfers.'”

The NBA’s timely, data-supported response, which attempts to undermine the Ivy researchers’ methodology of using three-man referee crews versus individual refs, may help ameliorate the prospect of a full blown crisis. But that, of course, depends on how the headline writers play the story and whether others come off the bench to join the game. As of now, the NBA website’s news section is conspicuously void of any reference to the story.